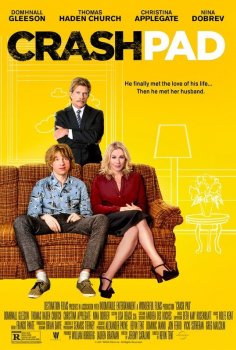 Title
Confirmed and upcoming movie titles only! Search before adding to avoid dupes.
Crash Pad
Year
The year the movie is set to be released.
2017
Director
Kevin Tent
Genre
Pick one or multiple movie genres.
Comedy
Cinema release
First cinema release date in any country.
October 27, 2017
Description
Film editor Kevin Tent has become known as one of the go-to guys for top directors in the industry. But after a decades-long career in the industry, he has wrapped production on the first feature film he directed on his own. The comedy film "Crash Pad" will be in theaters on October 27th, 2017, starring Domhnall Gleeson, Christina Applegate, Thomas Haden Church, and Nina Dobrev.
Where you watch
Downloads and Streams

Can I download or stream Crash Pad? Yes. Reports of pirated torrents and streams are available below.
When will Crash Pad be available on digital platforms like iTunes, Amazon or Apple+? As of now, there's no release date announced. This includes iTunes, Amazon, Blu-Ray and DVD.