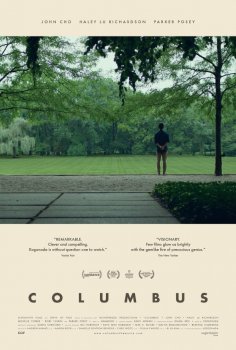 Title
Confirmed and upcoming movie titles only! Search before adding to avoid dupes.
Columbus
Year
The year the movie is set to be released.
2017
Director
Kogonada
Genre
Pick one or multiple movie genres.
Description
Among its many substantial virtues, Columbus is a film that understands the romantic appeal of the intellect. This is a restrained piece, where most desire is left subtle. But in its many lengthy and wandering conversations, its characters speak with thought and passion, challenging each other on their beliefs and stances about life, always with mutual respect. Admiration naturally grows out of curiosity. Longing is captured in halted glances or in a smile and a bit of eye contact held just a second or two longer than usual. This is a film of rare consideration, about everything from art to grief to existence to the simple act of wanting.

Jin (John Cho), an English-to-Korean book translator in Seoul, travels to Columbus after his father, an architecture historian, collapses while in town for a talk. As Jin waits to find out whether his semi-estranged father will ever regain consciousness, he strikes up a friendship with Casey (Haley Lu Richardson), a tour guide and lifelong Columbus resident. A year out of high school, she is tempted to leave to study architecture, but she fears for the well-being of her unpredictable blue-collar mother (Michelle Forbes), for whom she cooks and essentially looks after.
These geometric Modernist buildings pepper the landscape of the "Midwest Mecca of Architecture," Columbus, Indiana, and were designed by some of the most innovative architects of the 20th century: it's no wonder people travel there from all over to take architecture tours. Columbus' architecture is the canvas for "Columbus," the stunning directorial debut of Kogonada (mainly known up until now as a video essayist, whose Vimeo page is a great archive of visual analysis).
Emotional lines are as integral to the film as its visual lines, and Columbus does breathtaking work in establishing these connections throughout. While the film’s understatement in its storytelling is a virtue, its frequently staggering images offset that nuance. Cinematographer Elisha Christian balances a keen eye for the beauty of Columbus as a small city with clean lines of her own, adding depth to the already meticulous craftsmanship of so many local buildings. Columbus, as a real-life locale, is known for its impressive modernist architecture, from the halls of academia to the churches to the municipal bridges. What Christian and Kogonada accomplish in working through and around these spaces is often remarkable, mustering tiny visual jokes and emotional brushstrokes through the simplicity of everyday life.
Every shot in “Columbus” is an impressive visual achievement, but the ones that place Richardson and Cho at the center are superior from the start. As Jin takes a phone call outside his sprawling hotel (seemingly the only building in Columbus not touched by Modernist design), the ever-curious Casey eavesdrops on his conversation, delighted to eventually discover a kindred spirit who is equally at ease calmly puffing on a cigarette and discussing the intricacies of architecture. Initially, they’re separated by a tall wrought iron fence, but as they walk slowly together, a break appears — suddenly, they’re standing next to each other. The temperature of the scene changes on a dime, and from that moment, they’re never pushed apart again.

“Columbus” can be slyly mysterious from a structural standpoint, both with respect to the plot’s elisions and several cuts that demand that viewers fill in the blanks. The movie leaves quite a bit to the eye of the beholder, but it’s always worth looking at.
Where you watch
Downloads and Streams

Is there a Columbus torrent? Yes. Reports are available below.
When will Columbus be available on digital platforms like iTunes, Amazon or Apple+? As of now, there's no release date announced. This includes iTunes, Amazon, Blu-Ray and DVD.