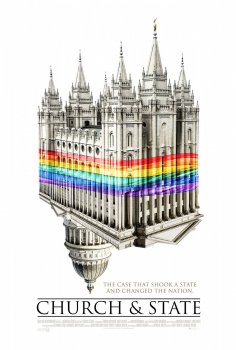 Title
Confirmed and upcoming movie titles only! Search before adding to avoid dupes.
Church & State
Year
The year the movie is set to be released.
2018
Director
Holly Tuckett, & Kendall Wilcox
Genre
Pick one or multiple movie genres.
Documentary
Cinema release
First cinema release date in any country.
August 10, 2018
Description
In 2013, a federal court ruling took the state of Utah by storm, forcing legalized marriage equality. Although the battle had just begun, with Utah being the unofficial capitol of the Mormon church, and havig control over local legislatures. This documentary not only focuses on the impact this had on the public, but also the power of religiously sponsored bigotry.
Where you watch
Downloads and Streams