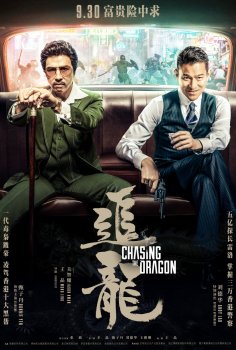 Title
Confirmed and upcoming movie titles only! Search before adding to avoid dupes.
Chasing The Dragon
Year
The year the movie is set to be released.
2017
Director
Jing Wong
Genre
Pick one or multiple movie genres.
Description
Chasing the Dragon (Chui lung) unites Donnie Yen and Andy Lau, two titans of Hong Kong cinema, in a decades-spanning crime saga involving a notorious real-life pair—gangster “Crippled” Ho and police sergeant Lee Rock. Curiously, both men’s stories were adapted for the screen in 1991: Ray Lui portrayed Ho in Poon Man-Kit’s To Be Number One, while Andy Lau headlined Lawrence Ah Mon’s Lee Rock and its sequel. At face value, Chasing the Dragon seems like a throwback to 1990s-era Hong Kong cinema, but upon closer inspection, the resemblance is merely a façade. As with the film’s protagonists, there’s an emptiness behind the mask.

Donnie Yen stars as infamous real-life drug kingpin Crippled Ho, who came to Hong Kong an illegal immigrant in 1963 and ruthlessly carved an empire from the chaotic underworld of drug dealers and corrupt police that ruled the city under notorious detective Lee Rock (Andy Lau).
Zeroing in on those mainland Chinese audiences who have yet to experience the famously irreverent originals, Wong steers very clear of imagery and themes that might trouble the country's stringent censors. There's hardly any sex and gore, two things he used to trade in with abandon during his trash-peddling heyday in the last century. Meanwhile, Hong Kong's complicated social and political turmoil during the 1960s and 1970s is portrayed as simply a consequence of British colonialism, its misrule embodied in the film by brutal British police officers lording it over their local underlings. In fact, the film's final stretch is focused on the showdown between its Chinese protagonists and their British nemesis — the result of which will certainly please patriotic mainland audiences to no end.
In one of many narrative short cuts that Wong has taken to turn this into a dual portrait, Ho comes to power primarily because of the designs of Lee Rock (Lau, gamely taking second billing), the rapidly rising police officer who identifies Ho – a great fighter who frequently shows off his skills, including in a throwaway duel with Philip Ng Wan-lung – as his ideal accomplice on the other side of the law who can bolster his lucrative empire of corruption.

“Guy Movie” or not, Chasing the Dragon is an uncritical celebration of its deeply flawed male leads. After all, Lee Rock was a crook who amassed $64 million through kickbacks, and “Crippled” Ho was an infamous heroin kingpin (in fact, the original English title of the movie was “King of the Drug Dealers”). To a certain degree, all gangster films glamorize the criminals they depict, but there’s something disingenuous about Chasing the Dragon’s thesis. The real villains, according to the film, are the British, who allowed this rampant corruption to exist, not our plucky “heroes,” who took full advantage of the situation to line their own pockets. Thus, a biting critique of British imperialism is rendered mostly toothless due to the film’s cartoonish handling of real-life events.

Chasing the Dragon concludes with the end of an era, as the pair go their separate ways in the face of a government clampdown against corruption and crime. With its limp treatment of dark and explosive material, the film also reduces larger-than-life characters and epic narratives into stuttering, second-rate melodrama. For all its technical polish and slick production values, Chasing the Dragon offers a lot of hot air, but not much substance.
Where you watch
Downloads and Streams

Is there a Chasing The Dragon torrent or stream available?
No, not yet.

When will Chasing The Dragon officially be available?
As of now, there's no release date announced. This includes official services such as iTunes, Disney+, Blu-Ray or DVD release.