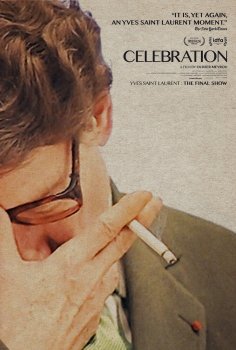 Title
Confirmed and upcoming movie titles only! Search before adding to avoid dupes.
Celebration
Year
The year the movie is set to be released.
2018
Director
Olivier Meyrou
Genre
Pick one or multiple movie genres.
Documentary
Cinema release
First cinema release date in any country.
November 14, 2018
Description
The long lost documentary, highlighting the final fashion show before Yves Saint Laurent sold their brand to Gucci. The filmmaker Olivier Meyrou was sued to suppress this project by YSL business partner Pierre Bergé, who didn't like his portrayal. After twenty years the film is finally hitting theaters around the globe, featuring never before seen footage from the event.
Where you watch
Downloads and Streams

Is there a Celebration torrent or stream available?
No, not yet.

When will Celebration officially be available?
As of now, there's no release date announced. This includes official services such as iTunes, Disney+, Blu-Ray or DVD release.