Ramona Flowers   August 30, 2017
Add to list
Receive an email once the selected quality (or above) has been reported 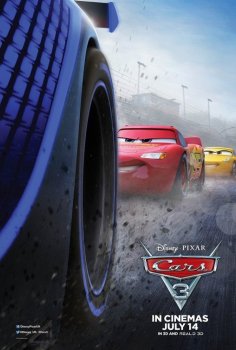 Title
Confirmed and upcoming movie titles only! Search before adding to avoid dupes.
Cars 3
Year
The year the movie is set to be released.
2017
Director
Brian Fee
Genre
Pick one or multiple movie genres.
Cinema release
First cinema release date in any country.
June 16, 2017
Description
The third installment in Disney Pixar's "Cars" franchise was released to cinemas worldwide in June of 2017, the film was the directorial debut from animator Brian Fee. The film is receiving better reviews from critics than the last installment, however "Cars" is still the most criticized of Pixars many franchises.
Where you watch
Downloads and Streams

Can I download or stream Cars 3? Yes. Reports of pirated torrents and streams are available below.
When will Cars 3 be available on digital platforms like iTunes, Amazon or Apple+? As of now, there's no release date announced. This includes iTunes, Amazon, Blu-Ray and DVD.