Ramona Flowers   August 26, 2017
Add to list
Receive an email once the selected quality (or above) has been reported 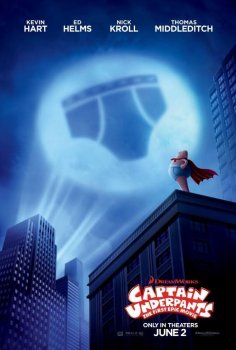 Title
Confirmed and upcoming movie titles only! Search before adding to avoid dupes.
Captain Underpants: The First Epic Movie
Year
The year the movie is set to be released.
2017
Director
David Soren
Genre
Pick one or multiple movie genres.
Cinema release
First cinema release date in any country.
June 02, 2017
Description
The first film adaptation of the children's book franchise, "Captain Underpants", was released in June of 2017 through 20th Century Fox. The DreamWorks Animation film is directed by animator David Soren ("Turbo"), and is written by Nicholas Stoller ("Get Him to the Greek").
Where you watch
Downloads and Streams