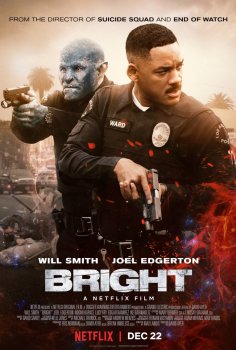 Title
Confirmed and upcoming movie titles only! Search before adding to avoid dupes.
Bright
Year
The year the movie is set to be released.
2017
Director
David Ayer
Genre
Pick one or multiple movie genres.
Cinema release
First cinema release date in any country.
December 22, 2017
Description
The seventh feature film from American director David Ayer, "Bright", will be released through Netflix on December 22nd, 2017. The fantasy action thriller is based on a script by Max Landis, about a police officer (Will Smith), living in a world where humans and mythical creatures live in harmony, who must partner up with an orc.
Where you watch
Downloads and Streams

Is there a Bright torrent? Yes. Reports are available below.
When will Bright be available on digital platforms like iTunes, Amazon or Apple+? As of now, there's no release date announced. This includes iTunes, Amazon, Blu-Ray and DVD.