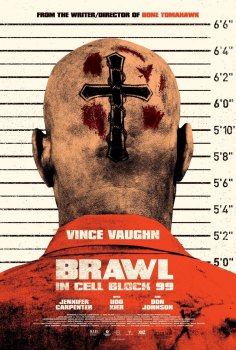 Title
Confirmed and upcoming movie titles only! Search before adding to avoid dupes.
Brawl In Cell Block 99
Year
The year the movie is set to be released.
2017
Director
S. Craig Zahler
Genre
Pick one or multiple movie genres.
Cinema release
First cinema release date in any country.
October 06, 2017
Description
The second feature film directed by S. Craig Zahler.
It premiered on TIFF this year, and got a lot of buzz due to its intense violence and Vince Vaughn's performance. It has since leaked as a WEB download and there are currently DVD Screeners floating around as it's being promoted for the Oscars. One of my favourite reviews of the movie said "Brawl in Cell Block 99 is able to walk the line between a down-and-dirty picture and one that genuinely cares about its tragic protagonist."
Where you watch
Downloads and Streams

One thought on “Brawl In Cell Block 99”