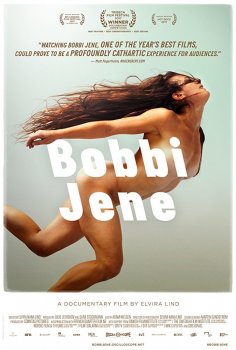 Title
Confirmed and upcoming movie titles only! Search before adding to avoid dupes.
Bobbi Jene
Year
The year the movie is set to be released.
2017
Director
Elvira Lind
Genre
Pick one or multiple movie genres.
Documentary
Description
American dancer Bobbi Jene Smith has spent 10 years as the star of famous Israeli dance company Batsheva. She finally makes the difficult and life-altering decision to uproot her life and career to move back to the US. Bobbi first came to Israel at a young age. She’s spent the past decade under the tutelage of renowned choreographer Ohad Naharin, who radically shaped her personal life and professional work. The life-changing decision to leave is made all the more difficult considering her budding relationship with fellow dancer, Or Schraiber.
Should Smith turn out to be a significant choreographic talent on her own, “Bobbi Jene” will prove a valuable record of her initial progress after leaving Batsheva. Yet neither her solo work nor her offstage personality proves particularly fascinating, at least as presented here.
The film is about a dancer, but there's not all that much dance in it. It's about a woman making a life-changing choice, but the movie itself has a very low-stakes atmosphere. Bobbi Jene Smith has had a uniԛue life as a dancer, but her personal problems are extremely ordinary. Lind gets sucked into these personal matters to such a degree that they take over the film. "Bobbi Jene," then, is really a film about Smith's love life, the challenges of maintaining a long-distance relationship, dealing with parents who don't "get it," fears that she might never have kids, that it's "too late" for her ... While these things are meaningful to those going through them, it is not especially interesting to watch, especially when Lind's intention is to profile a dancer whose work she clearly finds provocative.

Intriguing peripheral characters surface, particularly the subject’s mother, Denise, an evangelical Christian nonetheless supportive of her daughter’s sometimes envelope-pushing art. (Curiously, Laura Dern also turns up in a random dinner-party sequence, having Naharin’s “Gaga” movement language explained to her by Smith.) But the focus stays stubbornly on Smith, with or without boyfriend Schraiber, and while these are pleasant-enough people to be around, neither their personal life nor creative processes are probed with any great insight.
Directed by Elvira Lind with an unflinching and bizarrely raw intimacy (how DID she get such fly-on-the-wall footage of the dancer's most private moments?), the film holds the viewer rapt, even though a majority of the running time consists of Bobbi Jene's nascent independence compared to her (admittedly artful) expression through dance, both solo and in collaboration, clothed and unclothed.
The film would be intriguing even if Bobbi Jene were a less talented dancer - what we see of her on stage is absolutely mesmerizing - because it is her inchoate ambition that is most revealing.

Throughout the movie, we see snippets of the piece Smith wants to stage but, when Bobbi Jene reveals more of it during the charged finale, it’s surprisingly moving; in large part because we’ve come to understand the tears and toil that went into its making. The film may open with Smith naked but as Bobbi Jene concludes, we feel we’ve seen an artist truly exposed.
Where you watch
Downloads and Streams

Is there a Bobbi Jene torrent or stream available?
No, not yet.

When will Bobbi Jene officially be available?
As of now, there's no release date announced. This includes official services such as iTunes, Disney+, Blu-Ray or DVD release.