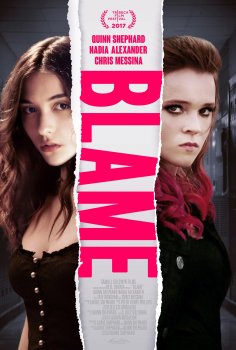 Title
Confirmed and upcoming movie titles only! Search before adding to avoid dupes.
Blame
Year
The year the movie is set to be released.
2018
Director
Quinn Shephard
Genre
Pick one or multiple movie genres.
Drama
Cinema release
First cinema release date in any country.
January 05, 2018
Description
The teen drama film “Blame” is written and directed by its star, 22-year old Quinn Shephard, in her directorial debut. A mentally ill high school student undergoes a relationship with a drama teacher, inciting vengeance in one of her close friends. Apparently this story will share thematic elements with ‘The Crucible’.
Where you watch
Downloads and Streams

Is there a Blame torrent? Yes. Reports are available below.
When will Blame be available on digital platforms like iTunes, Amazon or Apple+? As of now, there's no release date announced. This includes iTunes, Amazon, Blu-Ray and DVD.