Mojib   March 20, 2019
Add to list
Receive an email once the selected quality (or above) has been reported 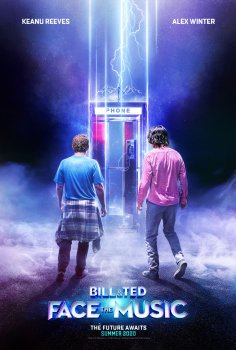 Title
Confirmed and upcoming movie titles only! Search before adding to avoid dupes.
Bill & Ted Face the Music
Year
The year the movie is set to be released.
2020
Director
Dean Parisot
Genre
Pick one or multiple movie genres.
Digital release
Official digital release date on services such as iTunes, Amazon, Netflix. It's the first known release date, without any country restriction. So if it's out on iTunes Russia first, this would be the digital release date.
September 01, 2020
Description
Alex Winter and Keanu Reeves are reprising their roles for the third installment of Bill & Ted franchise. Bill & Ted Face the Music is a highly anticipated film in the time-travelling comedy series and the reunion of Alex Winter and Keanu Reeves after nearly 30 years.

The first two movies, that were released in 1989 and 1991, showed Bill and Ted as partying doofuses charged with saving the world. The third installment will continue to track their time-traveling adventures. Directed by Dean Parisot, the film also stars Holland Taylor, Anthony Carrigan, Kristen Schaal, Scott Mescudi, Brigette Lundy-Paine, and Samara Weaving among others. Due to COVID-19, the film will be released through VOD on September 1st.

Is the movie going to be any good? It's going to be excellent.
Where you watch
Downloads and Streams

Is Bill & Ted Face the Music available online?
No. It has yet to be reported as either a pirated torrent or pirated stream.

When will Bill & Ted Face the Music officially be available?
It's set for a September 01, 2020 release. Illegal downloads and streams will be reported on this page. Its official release through streaming services, such as Netflix, will also be reported. See details regarding any Blu-Ray and DVD release dates in the comment section.