Mr. Meeseeks   August 20, 2019
Add to list
Receive an email once the selected quality (or above) has been reported 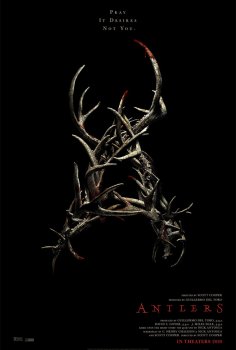 Title
Confirmed and upcoming movie titles only! Search before adding to avoid dupes.
Antlers
Year
The year the movie is set to be released.
2021
Director
Scott Cooper
Genre
Pick one or multiple movie genres.
Horror
Cinema release
First cinema release date in any country.
February 19, 2021
Description
Antlers is an upcoming horror movie based on Nick Antosca’s short story The Quiet Boy. Directed by Scott Cooper, it is a dark and twisted fairytale that is told from Julia’s (Keri Russell) perspective, as she tries to uncover the mystery behind the quiet boy in her class who is harboring a dangerous secret with terrifying consequences. She soon realizes that its best to keep some doors locked and some secrets undiscovered.

The trailers don’t give too much away about the plot, but they do suggest that the movie is bizarre and unsettling. Starring Keri Russell, Scott Haze, JT Corbitt, and Jesse Plemons, Antlers follows all kinds of supernatural shenanigans. The film was originally set to release on April 17, 2020 but it was postponed due to the COVID-19 outbreak.
Where you watch
Downloads and Streams

Is there a Antlers torrent or stream available?
No, not yet.

When will Antlers officially be available?
As of now, there's no release date announced. This includes official services such as iTunes, Disney+, Blu-Ray or DVD release.