Mr. Meeseeks   May 23, 2019
Add to list
Receive an email once the selected quality (or above) has been reported 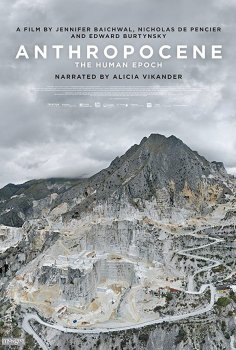 Title
Confirmed and upcoming movie titles only! Search before adding to avoid dupes.
Anthropocene: The Human Epoch
Year
The year the movie is set to be released.
2019
Director
Jennifer Baichwal, Edward Burtynsky, & Nicholas de Pencier
Genre
Pick one or multiple movie genres.
Documentary
Cinema release
First cinema release date in any country.
September 25, 2019
Description
Having already screened at over a dozen film festivals, the groundbreaking film, "Anthropocene", will be released later this year. Three filmmakers travelled the globe, documenting the breathtaking ways that human intervention has harmed the environment.

Narrated by Alicia Vikander.
Where you watch
Downloads and Streams

Is there a Anthropocene: The Human Epoch torrent or stream available?
No, not yet.

When will Anthropocene: The Human Epoch officially be available?
As of now, there's no release date announced. This includes official services such as iTunes, Disney+, Blu-Ray or DVD release.