Mr. Meeseeks   November 21, 2019
Add to list
Receive an email once the selected quality (or above) has been reported 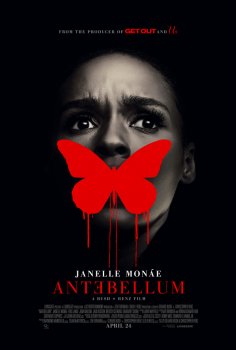 Title
Confirmed and upcoming movie titles only! Search before adding to avoid dupes.
Antebellum
Year
The year the movie is set to be released.
2020
Director
Gerard Bush & Christopher Renz
Genre
Pick one or multiple movie genres.
Horror
Cinema release
First cinema release date in any country.
August 21, 2020
Description
Antebellum is an upcoming horror film starring Janelle Monáe. Written and directed by Christopher Renz and Gerard Bus, it is an alternate reality nightmare film that is centered on Veronica – a successful author who finds herself trapped in a terrifying reality.

Based on the trailer, the main character Veronica appears to be a successful mother and author who lives in the modern American South. She seems to enjoy a happy life until things slide into supernatural. The plot revolves around elements of the old Antebellum South establishing in the modern world, and/or Veronica being drawn back into its dark past.
Where you watch
Downloads and Streams

Is Antebellum available as a pirated stream or pirated download?
No, not yet.

When will Antebellum officially be available?
As of now, there's no release data announced. This includes official services such as iTunes, Disney+, Blu-Ray or DVD release.