Anna and the Apocalypse

Bannister   September 30, 2017
Add to list
Receive an email once the selected quality (or above) has been reported 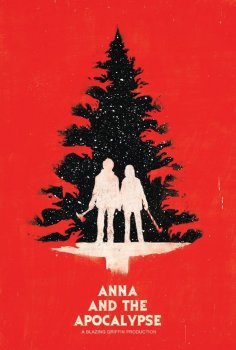 Title
Confirmed and upcoming movie titles only! Search before adding to avoid dupes.
Anna and the Apocalypse
Year
The year the movie is set to be released.
2017
Director
John McPhail
Genre
Pick one or multiple movie genres.
Description
In John McPhail’s gorehound musical “Anna and the Apocalypse,” one of the standout world premieres at this year’s Fantastic Fest, our high school heroine (Ella Hunt) sleeps through the start of a worldwide zombie attack, slips on her headphones, steps out her front door, and begins to sing. “It’s a beautiful day!” belts Anna. Behind her, one neighbor dies, another falls out of a window, and as the camera pulls back, we see her small Scottish town is on fire. Yesterday, her dad (Mark Benton), the school janitor, found out she’s skipping college for a gap year in Australia, the class bully Nick (Ben Wiggins) propositioned her in the cafeteria, and her dorky best friend John (Malcolm Cumming) nearly lost his job when he accidentally thwacked their co-worker with a bowling shoe.

Conceived by Alan McDonald and the late Ryan McHenry (of Ryan Gosling Won’t Eat Cereal fame), Anna and the Apocalypse follows a batch of teens in a small Scottish town as a zombie outbreak upends their cozy Christmas holiday. It's right now not clear when the movie will have, if it ever will, a wide cinema release. An iTunes digital download is likely in 2018 though, with torrents and streaming to follow.

You can sum up the curious appeal of Anna and the Apocalypse in a single sentence: a group of anguished teens, who tend to break into a musical number every ten minutes or so, get a reality check when zombies invade their town and start devouring the populace. If that piques your curiosity in the slightest, you are the audience for this film, which adopts a deliberate Disney Channel aesthetic so it can gleefully paint it red with all kinds of bloody flesh-eating.

An obvious touchstone here would be Edgar Wright’s Shaun of the Dead – another U.K. horror comedy where characters cracked jokes between scenes of shocking violence and gore – but then you see the characters start to sing and dance and be merry and realize this is its own beast altogether. Anna and the Apocalypse looks to tickle those who like zombies getting their heads exploded and those who enjoy some festive holiday cheer. I won’t lie to you guys: on a conceptual level, this movie looks like my kind of thing. I just hope the gag can sustain a feature-length running time.

This is an extremely bloody movie, full of eviscerations, decapitations, and mutilations. It’s also all pretty goofy and humorous. The MPAA would call it an R, but really it could get by with a PG-13 and a reminder for the squeamish that this is a full-contact zombie movie.
Where you watch
Downloads and Streams