Mavoy   June 27, 2019
Add to list
Receive an email once the selected quality (or above) has been reported 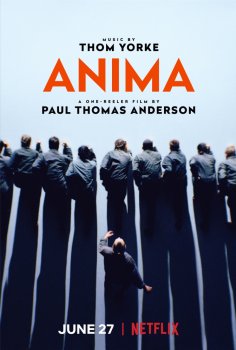 Title
Confirmed and upcoming movie titles only! Search before adding to avoid dupes.
ANIMA
Year
The year the movie is set to be released.
2019
Director
Paul Thomas Anderson
Genre
Pick one or multiple movie genres.
Drama
Cinema release
First cinema release date in any country.
June 27, 2019
Description
ANIMA is a short film ("one reeler") (12 minutes long) which serves as a companion piece to new Thom Yorke's album with the same title. It was released exclusively on Netflix on 27 June. The video follows Yorke dozing off while riding an underground train. It's featuring three songs from the album: “Not the News,” “Traffic” and “Dawn Chorus”. The film is directed by Paul Thomas Anderson in yet another collaboration with Radiohead.
Where you watch
Downloads and Streams

Is there a ANIMA torrent? Yes. Reports are available below.
When will ANIMA be available on digital platforms like iTunes, Amazon or Apple+? As of now, there's no release date announced. This includes iTunes, Amazon, Blu-Ray and DVD.