An Evening with Beverly Luff Linn

Mojib   January 22, 2018
Add to list
Receive an email once the selected quality (or above) has been reported 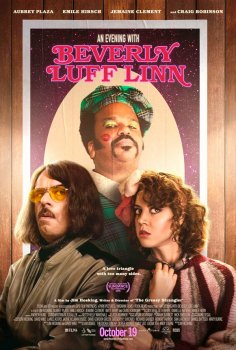 Title
Confirmed and upcoming movie titles only! Search before adding to avoid dupes.
An Evening with Beverly Luff Linn
Year
The year the movie is set to be released.
2018
Director
Jim Hosking
Genre
Pick one or multiple movie genres.
Comedy
Description
Described as a bizarre comedy starring an impressive cast including Aubrey Plaza, Emile Hirsch, Matt Berry, Jemaine Clement and Craig Robinson. Aubrey Plaza plays Lulu, a wife who wants to escape the boredom of everyday life with her husband played by Emile Hirsch. The movie premiered at Sundance, with Hollywood Reporter not being very positive in their review - "All this would probably play better with the assistance of some weed, but it would be irresponsible to review a film while intoxicated. " Yikes. Still, the movie looks too bonkers to just pass by.
Where you watch
Downloads and Streams

AN EVENING WITH BEVERLY LUFF LINN l Official US Tr...