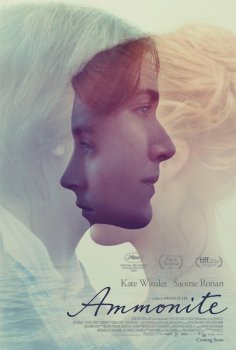 Title
Confirmed and upcoming movie titles only! Search before adding to avoid dupes.
Ammonite
Year
The year the movie is set to be released.
2020
Director
Francis Lee
Genre
Pick one or multiple movie genres.
Romance
Cinema release
First cinema release date in any country.
November 13, 2020
Digital release
Official digital release date on services such as iTunes, Amazon, Netflix. It's the first known release date, without any country restriction. So if it's out on iTunes Russia first, this would be the digital release date.
December 04, 2020
Description
With most studios delaying release until 2021, there just won’t be that many Oscar contenders in 2020. However, there are exceptions and Ammonite is one of them. Written and directed by Francis Lee, Ammonite is a lesbian romance film that tells the story of real life paleontologist and fossil hunter Mary Anning.

Anning is a tough fossil hunter who does her unappreciated hard work alone. One day, a rich tourist asks her to take care of his ill wife Charlotte. Both Anning’s and Charlotte’s lives change as they develop an intense relationship.


Anning (Kate Winslet) is a fossil hunter working alone on the rugged Southern coastline. She finds, collects and sells common fossils to tourists to support herself and her ill mother. One day, a rich tourist visits Anning and asks her to take care of wife Charlotte Murchison (Saoirse Ronan), who suffers from melancholia. For Anning, the offer is too much to turn down, so she accepts her as her new apprentice. Initially, Charlotte and Anning clash, but over time they start to form a passionate and intense bond that forces them to determine what the true nature of their relationship really is.

Early word-of-mouth for Ammonite is very strong. Its plot resembles that of last year’s hit “Portrait of A Lady on Fire”, which also had two socially restricted, tightly-corseted women taking walks down the top of the coast only to ultimately fall in love with each other. So, if you are looking for a tender story about love and femininity, especially the one that is similar to “Portrait of A Lady on Fire”, then look no further. Ammonite will definitely fill that void.

Is Ammonite available online?
No. It has yet to be reported as either a pirated torrent or pirated stream.

When will Ammonite officially be available?
It's set for a December 04, 2020 release. Illegal downloads and streams will be reported on this page. Its official release through streaming services, such as Netflix, will also be reported. See details regarding any Blu-Ray and DVD release dates in the comment section.