Mr. Meeseeks   September 21, 2021
Add to list
Receive an email once the selected quality (or above) has been reported 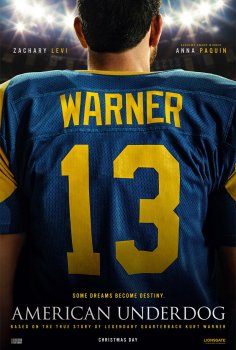 Title
Confirmed and upcoming movie titles only! Search before adding to avoid dupes.
American Underdog: The Kurt Warner Story
Year
The year the movie is set to be released.
2021
Director
The Erwin Brothers
Genre
Pick one or multiple movie genres.
Drama
Cinema release
First cinema release date in any country.
December 25, 2021
Description
Based on the life story of NFL quarterback Kurt Warner, directed by Jon Erwin and Andrew Erwin. Warner went undrafted out of college and failed to make the final roster of the Green Bay Packers the following preseason. He would remain unsigned for five years and found himself working in a grocery store before he was given a shot in the NFL. At the age of twenty-eight he began his first season as a starting quarterback with the St. Louis Rams, and against all odds won the Super Bowl championship in his first year.