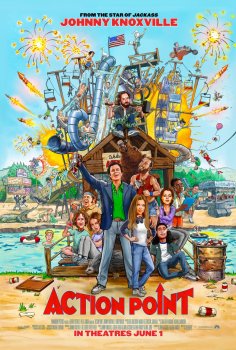 Title
Confirmed and upcoming movie titles only! Search before adding to avoid dupes.
Action Point
Year
The year the movie is set to be released.
2018
Director
Tim Kirkby
Genre
Pick one or multiple movie genres.
Comedy
Cinema release
First cinema release date in any country.
March 23, 2018
Description
Seldom do we see ‘Jackass’ frontman Johnny Knoxville in acting roles, though when we do it’s typically an action-packed film. “Action Point” is a comedic story loosely based on a real amusement park in New Jersey, known for its unregulated attractions, and its underaged, undertrained staff members. Directed by Tim Kirkby, the only other well-known member of the cast is fellow ‘Jackass’ star Chris Pontius. Despite the lack of starpower, Paramount Pictures has the film slated for an international release this March (coming to the USA in May).
Where you watch
Downloads and Streams