Mr. Meeseeks   December 18, 2019
Add to list
Receive an email once the selected quality (or above) has been reported 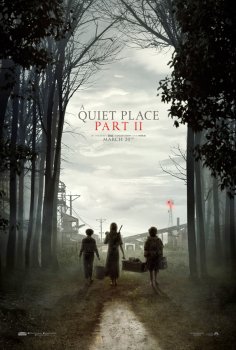 Title
Confirmed and upcoming movie titles only! Search before adding to avoid dupes.
A Quiet Place: Part II
Year
The year the movie is set to be released.
2021
Director
John Krasinski
Genre
Pick one or multiple movie genres.
Cinema release
First cinema release date in any country.
May 28, 2021
Digital release
Official digital release date on services such as iTunes, Amazon, Netflix. It's the first known release date, without any country restriction. So if it's out on iTunes Russia first, this would be the digital release date.
July 12, 2021
Description
A Quiet Place was a smash-hit with audiences upon its release in 2018. Since then, fans have been waiting for a sequel (sorry, no one has waited for this because this seems like a simple cash grab). Now, the wait is finally over as A Quiet Place Part II has got a release date. The teaser that was revealed recently reintroduces us to the Abbott family, who is now overrun by alien creatures after the events of the first film.

At the end of the first movie, Evelyn (Emily Blunt) and her kids are ready to venture beyond the sand path. And the teaser of A Quiet Place 2 suggests that it will pick up the narrative directly where A Quiet Place left off. Other cast members of the movie include Djimon Hounsou, Noah Jupe, Millicent Simmonds, John Krasinski, and Cillian Murphy. This movie was set to be released on March 20, 2020, but was delayed until 2021 due to the COVID-19 pandemic.

Is A Quiet Place: Part II available online?
No. It has yet to be reported as either a pirated torrent or pirated stream.

When will A Quiet Place: Part II officially be available?
It's set for a July 12, 2021 release. Illegal downloads, torrents and streams will be reported on this page. Its official release through streaming services, such as Netflix, will also be reported.