A Kid From Coney Island

Mr. Meeseeks   February 06, 2020
Add to list
Receive an email once the selected quality (or above) has been reported 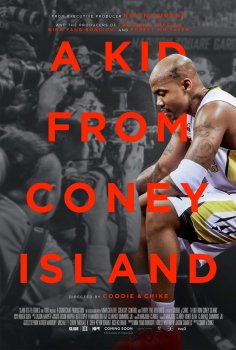 Title
Confirmed and upcoming movie titles only! Search before adding to avoid dupes.
A Kid From Coney Island
Year
The year the movie is set to be released.
2020
Director
Coodie & Chike
Genre
Pick one or multiple movie genres.
Documentary
Digital release
Official digital release date on services such as iTunes, Amazon, Netflix. It's the first known release date, without any country restriction. So if it's out on iTunes Russia first, this would be the digital release date.
March 10, 2020
Description
A Kid from Coney Island is a soulful documentary that tells the story of a former NBA star Stephon Marbury. Marbury’s story is told in this documentary by the people closest to him, Mabel Marbury (his mother), his siblings, as well as several former NBA stars including God Shammgod, Chauncey Billups, Ray Allen, as well as rappers, Cam’Ron and Fat Joe. They tell the story of Marbury with a clarity and depth that sheds light on the story behind his story.

There are two things that become very clear through this documentary: Marbury has a legacy of promise and talent, but he endured misunderstandings and pressures that could have destroyed him. A Kid from Coney Island shows mounting criticism about Marbury’s level of competence, capability, and commitment and everyone can benefit from watching it. It got digitally released on March 10, 2020.
Where you watch
Downloads and Streams

Is A Kid From Coney Island available online?
No. It has yet to be reported as either a pirated torrent or pirated stream.

When will A Kid From Coney Island officially be available?
It's set for a March 10, 2020 release. Illegal downloads, torrents and streams will be reported on this page. Its official release through streaming services, such as Netflix, will also be reported.