Mr. Meeseeks   January 28, 2018
Add to list
Receive an email once the selected quality (or above) has been reported 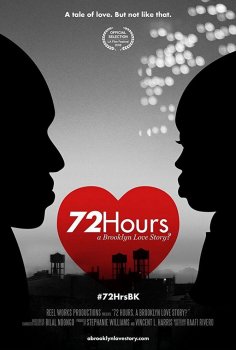 Title
Confirmed and upcoming movie titles only! Search before adding to avoid dupes.
72 Hours: a Brooklyn Love Story?
Year
The year the movie is set to be released.
2018
Director
Raafi Rivero
Genre
Pick one or multiple movie genres.
Drama
Cinema release
First cinema release date in any country.
February 13, 2018
Description
The debut feature film from director Raafi Rivero, “72 Hours: A Brooklyn Love Story”, premiered at the 2016 Los Angeles Film Festival, and after a long wait it will finally be released on February 13th, 2018. Melvin Mogoli stars as a teenager spending his final three days in Brooklyn before leaving for college, he finds his relationships quickly crumble into pieces in this short span of time.
Where you watch
Downloads and Streams

Is there a 72 Hours: a Brooklyn Love Story? torrent or stream available?
No, not yet.

When will 72 Hours: a Brooklyn Love Story? officially be available?
As of now, there's no release date announced. This includes official services such as iTunes, Disney+, Blu-Ray or DVD release.